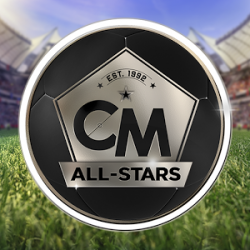 Do you have what it takes to lead a team to glory? Can you beat your friends and rivals across the globe as you compete in the most exciting and authentic football manager game available? Championship Manager: All-Stars is the multiplayer version of the world famous Football Management game that gives you the chance to show off your management skills against real life players worldwide.
Aim for football stardom as you build a superstar team from a database of thousands of real life players, available to sign from more than 440 clubs worldwide. Scout the live transfer market and bid for the best players, upgrade your stadium and train your squad, set your tactics and formation and defeat friends and global rivals on the way to league and cup glory.
Can you build a team of winners and lead them to glory?
Championship Manager: All-Stars offers 4 exciting game modes – All Star, Survival, Tournament and World Tour. Play a full league campaign, win as many matches before you lose 3 lives or enter a one off tournament for a share of the prize pool. And if you’re tired of thrashing your friends then flex your managerial muscle on the World Tour – a brand new single player campaign that sees you pit your team against the best club sides in the world!
Who’s in YOUR All Star team?
FEATURES
FREE TO PLAY
Available to download for free. Experience everything Championship Manager: All-Stars has to offer today!
MULTIBALL
Four game modes provide unique challenges and endless game play. Aim for the top of the league over a full season, enter sudden death and see how many games you can win with 3 lives or enter a tournament to win big! Alternatively enter the single player campaign against the best clubs sides in the world. The choice is yours…
MAKE FRIENDS & INFLUENCE PEOPLE
Compete for glory against real life opponents. Play and chat with friends, share team boosts and earn bragging rights as you lead your team to victory
TRAIN FOR GLORY
Set your training regime and improve your players across more than 15 different skills.
TACTICS ARE FOR WINNERS
Set basic and advanced tactics to drive your team to glory. Whether you prefer 4-4-2 or 3-5-2 the choice of formation is yours. Set your basic and advanced tactics and out-think and out-play your friends and rivals.
BE A STAR IN THE TRANSFER MARKET
Splash the cash on a superstar or search for the next big thing? You make the transfer decisions as you try to outwit your rivals in the live player auctions. Alternatively, send your scout out to search for the midfield maestro your team is missing.
LEAD FROM THE BENCH
Getting ready for match day is only part of the job. At kick off, support your team and make real-time decisions to give your players the edge and make the difference between victory and defeat.
BUILD THE DREAM
Improve your stadium facilities and hire better staff to build your footballing dynasty and become a managerial legend.
Got a suggestion for Champ Man Allstars or have an issue? Contact our support team at eu-mobile-support@square-enix.com
www.facebook.com/championshipmanager

How to Play Championship Manager:All-Stars on PC,Laptop,Windows