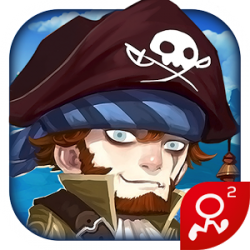 Ahoy matey! Ready to take the helm and hoist the black flag on your very own vessel? Welcome to Pirate Empire, a 3D adventure game for enterprising buccaneers and fun-loving corsairs. Build and customize fearsome ships, recruit and train infamous sailors, and test your ship’s prowess in cutthroat raids and battles! Give your enemies no quarter and become the fiercest commander to sail the seven seas. Arrr!
***Features***
BUILD CUSTOM SHIPS
● Strengthen your ship’s abilities by adding military, commercial, and entertainment cabins.
● Fix your ship after each battle and upgrade it to increase your stats.
● Purchase new ships and decorate them with swashbuckling skins and emblems.
ASSEMBLE YOUR CREW
● Hire sailors to man your ship and provide skills for battle.
● Upgrade your sailors, give them their ideal jobs and research their battle skills.
● Recruit legendary pirates like Blackbeard and Red Eric to your cause!
FIGHT IN NAVAL BATTLES
● Travel the seven seas and raid passing ships for loot and resources.
● Rise through the ranks in the Arena and become King of the Pirates.
● Unlock passive and active skills to use in battle.
R2Games Official Website: http://www.r2games.com/
R2Games Support: http://support.r2games.com/

How to Play Pirate Empire on PC,Laptop,Windows