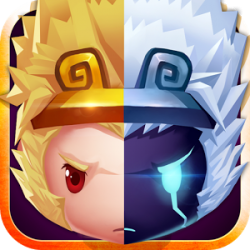 Monkey King HD is the first Unity 3D animation game worldwide!
With Hollywood frames, Xuanyuan Sword effects and IMAX FX.
As a 360° film of cute characters, Japanese and Korean styles,
It also has interactive stories, full of fun.
You can not miss it, the 2015 universal mobile game!
Meet others “face to face” in unique explorations;
Get messages in time on our Facebook live;
Expect the online and offline activities;
And experience the creative 12V12 battle!
————◆Feature◆————
[Unity 3D modeling, HD]
Built By high-end Unity3D engine with top visual treat,
It shows hundreds of exclusive cool skills and magnificent dynamic particles.
With film Ult, Fight is like a 3D movie.
[Focus on socializing, brand new gameplay]
Interact face to face in a “strong socializing” game;
Contact with the real but not “robots” in unique exploration system;
Invite friends to challenge Boss and get Xuanyuan Sword in this splendid world.
[Thousands of cards, free combination]
The 4 races: Humans, Fairies, Buddhists and Sprites
Are unique and restrain each other.
So there are more combinations choices for you!
Heroes have their special talents and rush into a gorgeous battle!
[Numerous cards to summon]
One game,one stage, a strong strategy game of more fun.
Climb the Flaming Mountain and rush Dragon Palace in Journey To The West,
With creative 4-row wheel war and 12 VS 12 battle!
[Humans]
Normal MAG & POW, weak output.
Features of humans skills are ability of raising DEF, such as MAG DEF.
Humans are mainly trained to be tanks.
Representative skills are Divine Wrath and Kill Fairy.
[Fairies]
High MAG, universal strength.
Focus on combination of ATK & DEF with high crit and dodge.
The most popular race with the highest efficiency to advance in map.
Easy to die with dodge however.
Representative skills are Bad Hurt and Kill Buddha.
[Buddhists]
Caring all living beings with many healers,
Add HP to single, random and all targets.
There are also tanks with low output.
Representative skills are Impregnable and Slash.
[Sprites]
Sprites like to play tricks.
Impair DEF and DMG as indirect outputs and tanks,
Enemies’ lower DEF means higher DMG to them,
Sprites get lower DMG and add self DEF.
Representative skills are Curse and Regicide.
[Task]
Sequel to Journey to the West, Another battle between Gods,
Fights between warlords and the Xuanyuan Sword is waiting!
Seven Fairies, Monkey King, Spider Cave, Havoc in Heaven,
Wukong, conquer the demons!
Fantasy starts universally Westwards!
Fulfill the tasks and get Kwan-Yin,
And Buddha is waiting for you!
————◆Customer Service◆————
Viste Facebook website：www.facebook.com/monkeyking3d
Customer service mailbox：cs@okgame.tw
Game Official website：monkey.vstargame.com

How to Play Monkey king HD on PC,Laptop,Windows