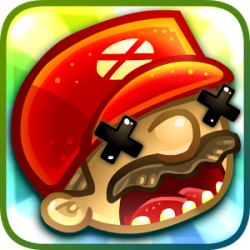 From the creator of Pretentious Game comes a new platformer with a twist! It\’s payback time as you play as the enemies instead of the hero in this unique platformer puzzle game!
Nominated for Most Innovative Game in the Indie Prize at Casual Connect Asia 2015!
\”Kill the Plumber is an inventive and satisfying reverse platformer.\” – 8/10 Silver Award PocketGamer
\”Lets you play as a series of monsters attempting to kill a, yes, blue-and-red garbed plumber.\” – The Guardian
\”It\’s a script-flipping mobile game that openly and intentionally parodies the NES classic.\” – Mashable
\”Kill The Plumber flips the usual set-up of (platformer) games on its head by having you control the enemies stopping a plumber in a red outfit from reaching the end of the level any way you can.\” – Siliconera
\”These critters need a voice. Their story needs to be told.\” – GameZebo
\”I like it a lot.\” – AppSpy
\”Kill the Plumber plays brilliantly.\” – JayisGames
\”a clever-looking game\” – SlideToPlay
\”uniquely reversed puzzle platformer\” – Stuff.tv
\”In fact, it\’s actually quite a clever title – instead of controlling the good guy, you\’re in charge of various enemies who have to stop him from getting to the end of each stage. \” – NintendoLife
Feature #1 Many playable enemies even bosses!
Feature #2 Pay once and play! No iAP!
Feature #3 Compete for the best speed run record.
Ever wonder what\’s it like to be at the other side of the table? Now you can play as different types of enemies like a jumpless minion, a stomper and a ghost who can\’t move if the plumber is facing him! It gets more challenging when the plumber can now throw fireballs, becomes invincible, even fly and swim! You need to be at your best to outwit him by utilizing platformer tropes you have learned when you died in all the other games before.
Have you ever been in a boss battle where you play as the Boss? Get to play as the Big Ghost, Golden King and Big Fish!
The game has been praised for its great level design, awesome progression and cool graphics. Kill the Plumber is a highly polished platformer game that will test all your cognitive skills. There are puzzle levels, race, survival, boss fights and more.
The game also boasts funny surprising twist endings and some cool comic cutscenes.
Best of all, we don\’t offer any in-app purchases! Future updates, new worlds, levels and playable enemies come free upon purchase!
For more information and questions, please contact us.
Facebook: facebook.com/killtheplumber
Email: tekiktp@gmail.com

How to Play Kill the Plumber on PC,Laptop,Windows

3.Open Google Play Store and search the Kill the Plumber and download,