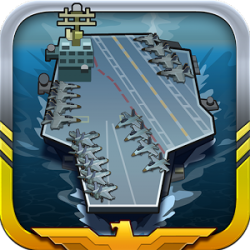 *** Thanks to the 2,000,000+ players who have already fallen in love with Fleet Combat, and helped us to No.1 in several countries! ***
Are you tired of the Defense games that towers never move? Are you bored with those games that you always win? We players call for a Defense Revolution, and the revolution has come.
Say goodbye to stupid AI and almighty heroes, and welcome the revolutionary Fleet Combat! As a fleet commander, you will lead in epic future naval battles, utilize your high-tech ships to bring victory to your people. Sometimes we chase storms, sometimes we are the storm. Fleet Combat will give you the most fascinating gaming experience.
20 soul-stirring battles
3 types of sea waters
15 kinds of ship borne artilleries
20 kinds of missiles
25 kinds of aircrafts
25 kinds of playing modes
And a huge amount of various naval vessels of 5 categories and 30 kinds
-Beautiful and Delicate-
There are the grand world map, the attractive blue sea, the different styles of islands and the various elegant warships. You will feel immersive!
-The Free and Flexible Weapons Collocation-
● 15 kinds of the automatic weapons and 70 kinds of manual weapons
● Free combination according to the different carrier abilities and the weapon weight
● To structure the Defensive Matrix through using the weapons of the different ranges
● To promoting the maximum damage output in an unit time through controlling the cooling time of the weapons
-The Abundance Combat Factors-
● 10 shapes of the enemy warships
● In different battles, the enemy warships equipped with different weapons
● Various especial fleets totaling 25 kinds
● Various soul-stirring battles such as pursuit and attack, breaking through, defensive and so on.
-The huge but easy Upgrade System-
● All of the weapons can be unlocked and upgraded through getting EXP in the battles.
● Various warships can be got through using the level starts got in every battles.
-The Attractive and Dynamic Original Music-
● The mystery in the open, the grandness in the world map, the enthusiasm in the shipyard, the exciting one in the battles, the intension in the decisive battles, the relieved feeling in the end… There are 6 original songs to bring the top experiences to you!
If you want to get more information, please pay attention to the following contents:
video trailer- http://www.youtube.com/watch?v=gMx1Vwr8GUA
email- triadgene@gmail.com
facebook- http://www.facebook.com/pages/Triad-Gene/532690203432132
twitter- https://twitter.com/TriadGene

How to Play Fleet Combat on PC,Laptop,Windows