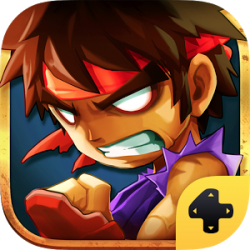 Dynamic online-RPG with automatic battles. Combine dozens of fighters, skills, weapons and pets to develop a unique strategy. Defy greedy bosses in dungeons and tricky players in the arena!
Estimates
5/5 plenty of entertainment with an insane amount of combinations of fighters, weapons and skills (Appoday)
\”Endless entertainment with countless ways to combine fighters, skills, & more!\” -Appoday
Story
In a cozy peaceful planet all was well until suddenly the sky has not fallen homely box. Not only is the fall destroyed half a planet, so more and the box was a Pandora\’s box – the most wanted treasure in the universe. From all over the world came to the planet thousands of adventurers and thieves in the pursuit of box that promises power of the gods and untold riches. Who is stronger than all of them? We learn in the battle!
Chaos Fighter – online fighting game-RPG with HD-graphics and short gaming sessions
Change the fighters before each battle. 50 characters for every taste. Play archangel, witch, death or hero. Cultivate one fighter or take with you a few for all occasions.
Create clever combos for each battle. Choose from 40 skills 10 magic schools. Become adept school fire, mirage, healing and others. Scattered enemies fiery meteorite confusing ghostly double or stop the poisonous fog.
Choose from hundreds of types of equipment. 800 types of armor and weapons that are unique to each soldier. Fight stick, plunger or boxing gloves.
Fight with the pet. 20 pets to choose from. Tame polar penguin, bat or slug. Take care of your pet and it will be more useful in combat.
Befall fight with friends or solo. 400 dungeons and more than 20 chains of quests. Dungey Come with friends or take their fighters in the adventure, even if they are offline.
Test your strength in the arena and World Championships. Fight in the arena 1v1, or show yourself to the world tournament, the results of which are updated every week.
Join the guild and captures the entire planet. Be one of the 20 warriors guild and fight every week for fame and wealth. Develop your guild and participate in Star Wars, conquering the world.
Discover the wild-wild world. More than 20 types of activities. Gain levels and gold in three types of towers, choose bonuses in the planetarium, dig gold at Mount treasures or send your soldier swing training camp while you offline.
Features
– Play for free
– Fight against real players, using thousands of combo
– Challenge players from around the world in the arena and World Championships
– Join the guild and captures the entire planet in Star Wars
– 20+ types of activities
– 8 characters and 40+ fighters for each battle
– 800 units of weapons and equipment
– 40 skills from 10 schools of magic
– 20 pupils for training and assistance in combat
– 20+ quests and dungeons 400
– 5 Russian characters: Pushkin, Grozny, Ilya and the Bear
– Come with friends or take them Dungey fighters in the adventure, even if they are offline
CAUTION Chaos Fighters game is free, but some game items can be purchased for real money. If you do not want to use this function, set the password in the settings to purchase Google Play Store. In addition, according to the Terms of Service and Privacy Policy, download and play the game Chaos Fighters Only users older than 12 years.
The game is available for the territories: the Russian Federation, Armenia, Azerbaijan, Belarus, Georgia, Kazakhstan, Kyrgyzstan, Moldova, Tajikistan, Turkmenistan, Ukraine, Uzbekistan, Abkhazia and South Ossetia

How to Play Chaos Fighters on PC,Laptop,Windows