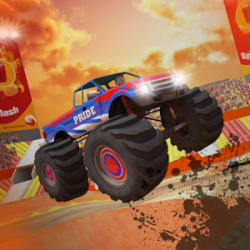 Real monster legends are born here!
3D Monster Truck Racing lets players control the world´s most powerful vehicles, and let them jump directly into epic destruction derby, extreme demolition and extreme truck driving races. With three different game modes 3D Monster Truck Racing is one of the 3D Monster truck Racing games on the google play store that will be fun to play for hours to come! The real monster legends are born here because you can compete in sessions, championship, and freestyle races. In all game modes you get the chance to smash everything up. Smash your machines into boxes, cars, campers and other crazy stuff.
3D Monster Truck Racing is full of real stunt driving action
It is total monster truck mania, you get to get behind the wheel of insane world´s most insane monster trucks, that have crazy and most brutal arsenal of horsepower under the hood. Use this power to take stunt ramps head on earn points and multiply them by performing crazy stunt combo´s. This is why real monster legends are born here! 3D Monster Truck Racing is a combination between full on destruction derby, crazy stunts and showing your monster truck racing rivals the most insane score possible on the scoreboard. Sometimes extreme demolition is necessary to get the highest score possible and of course it is FUN to smash, crash and destroy everything in the stadium. Master the controls, they are not hard making this t for sure one of the monster truck games easy for kids that work good as well!
3D Monster Truck Racing game features
– Freestyle time races where you need to race as fast as possible through checkpoints before time runs out!
Ten sessions, where you need to take on ten rivals and beat them on their own game, show the world you are the meanest, toughest truck driver out there!
– Three championship cups to take home! Become a real trucking hero, take your opponents head on in pulse pounding races.
– Eight different epic monster trucks racing has never been this fun.
– Earn cash and spend it to upgrade you monster trucks.
3D Monster truck racing ask for extreme truck driving
Make sure you win races, the cash you earn you can spend on new trucks. Master your tricks in different racing modes. Tear through more than 40 extreme truck driving events, Take out the competition as you blaze through exciting levels, crush their hope of domination in the three different destruction derby 3D monster truck racing game modes.
Please give us some support by rating our game on Google Play or following us on:
Facebook – https://www.facebook.com/VascoGames
Twitter – https://twitter.com/VascoGames
YouTube – http://goo.gl/HChVVx

How to Play 3D Monster Truck Racing on PC,Laptop,Windows